Following the departure of Thiago Silva, Paris Saint-Germain have looked a little shakier at the back.

The Ligue 1 champions lost their first two games of the new campaign, and while things have stabilised for the time being, Thomas Tuchel has made it clear he’d like the Brazilian replaced.

That’s where Antonio Rüdiger comes in, as the Chelsea defender is struggling for game time at Stamford Bridge under Frank Lampard, and could leave London to find himself regular minutes elsewhere.

RMC Sport were the ones revealing the interest from the French capital in the German defender, and they continue to push it on Tuesday in their live blog, revealing that Tuchel and the centre-back ‘have exchanged many times on the telephone to discuss the possibility’. 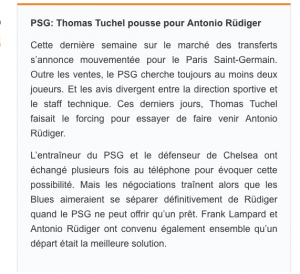 That being said, talks between Chelsea and Paris Saint-Germain are ‘dragging’ since the Blues would like to get rid of their player on a permanent basis, while Leonardo and co. ‘can only offer a loan’.

Finally, they explain ‘Frank Lampard and Antonio Rüdiger have agreed together that an exit is the best solution’.