The Spanish newspaper also stated the Los Blancos leadership are not keen on the France international as they fear his arrival could block young talents like Federico Valverde and Martin Ødegaard.

‘Fight for Pogba’ reads a headline in today’s Mundo Deportivo as Zidane continues to insist on signing his compatriot.

The French coach, who views the midfielder as a ‘leader’, is aware Juventus are ready to bring Pogba back to the club. The new tax laws in Italy also favours the Old Lady to offer him an improved salary of €18m per year.

However, the 26-year-old prefers a move to Real Madrid to play under his idol, Zidane.

Mundo claims the earliest Florentino Pérez is willing to sign Pogba is next summer, provided the entire cost of operation doesn’t exceed €50m. 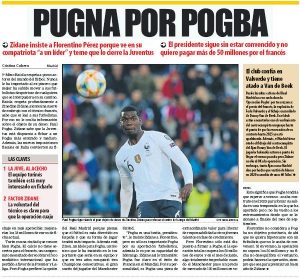 Pérez doesn’t consider the United player as a priority because Pogba has not convinced him.

If the operation doesn’t exceed €50m and Pogba’s salary demands doesn’t unbalance the books at Real Madrid, then Pérez would consider rewarding Zidane by signing the United player.

With a contract at Manchester United lasting until June 2021, with a club option to extend it by a further year, there’s simply no way Pérez could get his way until summer 2021 at the earliest… and even that may be a long shot.

“He would fit better with Man United or Chelsea” – Liverpool...