Chelsea’s Pedro to AS Roma is basically done.

It’s felt that way for a while, bar the odd claim that Fiorentina were interested, and now Gazzetta dello Sport are confident it will go through.

The Spaniard will arrive on a two-year deal with the option of a third on a wage of €3.5m/year, which is an increase from the €3m previously reported.

That is down to Italy’s ‘post-Covid government decree’, which ‘allows those who come to Italy for at least two years to be taxed not on their total income, but only on 30%’.

As well as the money, the newspaper explains Paulo Fonseca pulled out all the stops to convince the Chelsea forward, as the Portuguese manager ‘called him’ personally to ‘communicate his esteem and explain how he would like to use him’. 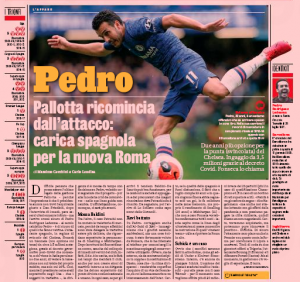 Roma will look to utilise the versatile winger either in his normal role or as an ‘atypical centre-forward alongside or instead of Džeko’.

At this point, as he edges towards his 33rd birthday, Pedro will simply want to play competitive football and ensure he keeps earning enough money to have a comfortable life once he retires.

Since AS Roma can offer both, this makes a whole lot of sense.