Portuguese manager Vítor Pereira is currently analysing a job offer he has from Everton, according to his home country media today.

Newspaper O Jogo reports the coach is ‘studying’ the pros and cons of taking charge of the Toffees, who sacked his compatriot Marco Silva last week.

Even though Pereira’s contract with Shangai SIPG expires at the end of the year, he has an offer for a renewal which is also being considered.

And the Chinese national team is also said to be interested in his services, having made an offer, so there’s a lot of competition for Everton to get their man. 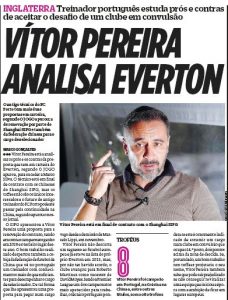 But it’s claimed Vítor Pereira ‘doesn’t rule out’ a move back to Europe. O Jogo recalls that he had been considered to replace David Moyes at the club in 2013, and wonders if this is the right time to take charge.

However, although the Premier League is a good opportunity to be in the spotlight, the manager is also afraid of being ‘harmed’ in case he can’t give the Toffees a good recovery this season.