Barcelona were keen on adding Matthijs de Ligt to their squad for next season, but the Ajax star is expected to join Juventus.

Having failed to land the Dutchman, the La Liga winners reportedly identified Victor Lindelof of Manchester United as an alternative target to strengthen their back four.

On June 26th, we carried a report from Mundo Deportivo, who claimed Ernesto Valverde’s side ‘want’ the Sweden international and have already contacted the Red Devils several times.

It was also explained Ole Gunnar Solskjaer’s side rejected the approach from the Camp Nou club as they have no intention of letting their centre-back leave.

Tuesday’s edition of Mundo Deportivo once again relays those claims and goes on to state, ‘In order to activate the operation, the Catalan club is waiting for the ‘Red Devils’ to agree to sit down and talk.’

Last week, Barca unveiled their new signing Frenkie de Jong and that gave Mundo an opportunity to speak with one of his agents Hasan Cetinkaya, who also represents Lindelof. 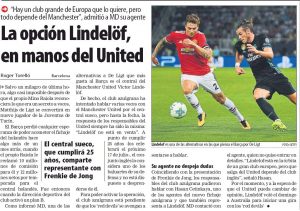 “Lindelof is in the orbit of a great European club, but leaving United depends on the English club,” Cetinkaya said.

Lindelof has travelled with the United squad to Australia for the pre-season tour, and an exit is very unlikely.