For over a week or so, there has been no major developments in regards to the reports linking Paul Pogba with a move to Real Madrid.

The fact the France international is currently with the national team preparing for the upcoming fixtures next month might have something to do with it, and Friday’s edition of AS claims the Manchester United star expects Los Blancos to ‘reactivate’ their efforts to sign him in June.

It is claimed that Zinedine Zidane has requested the 13-time European champions to sign his compatriot to strengthen the midfield, which is why the 26-year-old ‘waits patiently’.

The former Juventus man is of the belief Zidane will have a lot of say when shaping his squad for the coming season and that has made Pogba hopeful the Spanish capital club will make an approach for him.

However, AS state signing the World Cup winner has not convinced Real Madrid president Florentino Pérez, even though the manager wants him.

In addition to this, there are two main obstacles. 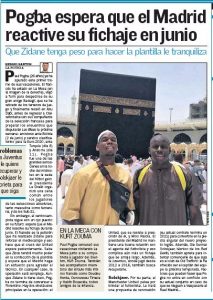 Pogba’s agent Mino Raiola does not maintain a good relationship with Perez and this further complicates Real Madrid’s chances of signing the midfielder.

The Red Devils are unwilling to let Pogba leave Old Trafford in the summer and Ole Gunnar Solskjaer wants his employer to put up a fight in order to keep their star player.

The Norwegian manager is trying his best to convince Pogba to continue at United and wants him to be the ‘cornerstone’ of his new project at the club.

It looks like the saga surrounding Pogba’s future could drag for most part of the window, until the player or United publicly come out and rule out the transfer.

Further claims West Ham are after versatile player – Joined by...