Over the past two days, there hasn’t been a major update in the Alexis Sanchez saga.

Inter Milan are interested in the Manchester United player, but the two clubs haven’t found an agreement over the forward’s salary.

Saturday’s edition of Gazzetta dello Sport claims there hasn’t been any significant changes on the Milan-Manchester axis, but the negotiations have been ongoing and they could be heading towards conclusion.

The Nerazzurri and the Red Devils’ immediate focus is on their next fixtures. Ole Gunnar Solskjaer’s side host Crystal Palace on Saturday, while Antonio Conte’s side will take on Lecce on Monday.

Despite that, it’s claimed there could be a conclusion before kick-off at the San Siro. Gazzetta believe there’s a possibility of ‘white smoke’ for Sanchez’s arrival at Inter, even though the two clubs are still distant regarding the Chilean’s salary.

Inter are willing to pay €4m in wages to Sanchez during his loan spell. However, Manchester United expect the Serie A side to make an improved offer. 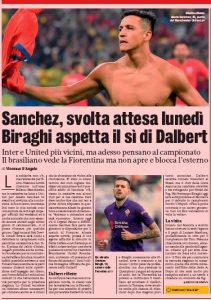 The former Arsenal man ‘presses’ his agent, Fernando Felicevich, to quickly help him get a move to Inter.

This has also been relayed by FcInterNews on Friday, who go on to add that Sanchez is of the belief his time at Old Trafford has come to an end.

One way or another, there will be a conclusion in the next 10 days as the European transfer window will close on September 2nd.