Ever since Ole Gunnar Solskjaer took the reins at Old Trafford last December, Romelu Lukaku has been behind Marcus Rashford in the pecking order Manchester United’s attack.

Before the end of the season, the Belgium international’s agent Federico Pastorello admitted his client would be open to the idea of making a switch to Italy, and, ever since, there has been speculation linking the 26-year-old with several Serie A clubs.

To clarify a few things, Het Belang van Limburg in Belgium took a look at the striker’s situation in Tuesday’s print edition.

Despite scoring over 40 goals in the last two seasons, the newspaper state the former Everton star was told last week he can leave the 20-time English champions, provided there is a ‘good offer’.

There is a certain amount of surprise the Red Devils are willing to part ways with the frontman after having invested €85m plus bonuses in signing him in 2017, especially after the Norwegian informed Lukaku he would still count on him for next season.

Embed from Getty Images
However, it has been ‘made clear’ in the past week to the Belgian that he can leave United in the summer, as long as a good offer lands on the Red Devils’ desk. 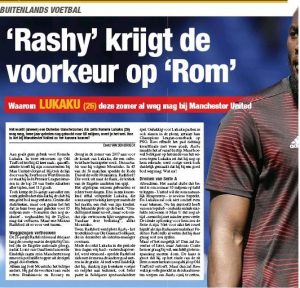 The issue there, according to HBVL, is that few clubs would be willing to pay a hefty fee to United in order to acquire Lukaku’s services.

As of now, the ideal solution is to play in the Serie A, but for that to happen, either Juventus and Antonio Conte’s new club, Inter, will have to make a major effort to sign the attacker.

If not, there are chances he could still continue at Old Trafford and if that happens, Lukaku will have to fight with Rashford for a place in the starting XI.