We have covered several reports from the Catalan media talking about Manchester United and Everton’s interest in Barcelona defender Yerry Mina. Today, on deadline day, still no decision has been made.

Thursday’s edition of Sport claims the Colombian international’s ‘future points’ towards the Premier League as the Red Devils and the Merseyside club are both interested in securing his services.

Ernesto Valverde’s side are only waiting for these clubs to submit a concrete proposal in order to take the player away from Camp Nou. The Catalan newspaper claims, in the ‘last few hours’, Jose Mourinho’s side have increased their proposal for the centre-back, such that it would exceed €30m.

There is no mention of what Marco Silva’s side have offered or are willing to offer for the former Palmeiras man. 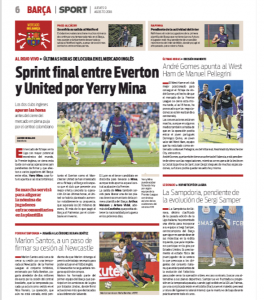 Three of Barcelona’s summer signings – Arthur, Malcom and Arturo Vidal – are from South America and will be the three non EU players in the squad.

This means Mina has no future at the club and his departure will free up one position in the non EU quota.

Barca and Mina have been holding out for a big Manchester United offer, and Sport seem to believe it’s arrived.