Three days ago, Sport reported Manchester United’s interest in Ivan Rakitic and the latest claims stated a €50m fee would be sufficient for Barcelona to sanction the midfielder’s sale.

Over the past three months, the newspaper has been linking the 31-year-old to the Red Devils, while other Catalan publications have not come up with a concrete report about United’s interest in the player.

Monday’s edition of Sport once again pushes the Croatia international to Ole Gunnar Solskjaer’s side and claims the 20-time English champions have ‘shown interest’ in the former Sevilla star.

Manchester United and Inter Milan have been interested in Rakitic since May, according to the claims, while Paris Saint-Germain have been chasing him since last summer.

Though Rakitic has insisted on numerous occasions about his desire to continue at the Camp Nou and has the support of Ernesto Valverde, the report claims the La Liga winners have not discarded the option of sanctioning his sale. 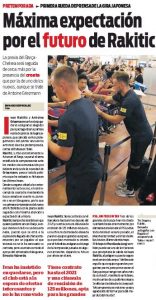 Sport states Barcelona are waiting for interesting offers for Rakitic, who still has two years left on his contract.