Catalan newspaper Mundo Deportivo today takes a look at those players who could leave Barcelona in the summer and Philippe Coutinho is included in the list.

The Brazil international arrived at the Camp Nou from Liverpool in January 2018 for a club record fee of €120m plus €40m in variables, and the La Liga winners are demanding €100m to part ways with him.

It’s claimed that such a figure can only be paid by the clubs in England and Paris Saint-Germain. Though there is no suggestion of PSG, Manchester United and Chelsea do get a mention.

The Red Devils and the Blues are the two clubs who have ‘asked the most about’ the 26-year-old.

When his representative asked for a meeting with the Spanish champions to discuss his client’s case, the latter responded by saying ‘there is no case’. The former Reds star is ‘seriously evaluating his departure’ from the club.

It’s clear the Blaugrana do not value the South American, but joining Ole Gunnar Solskjaer’s side or the Europa League finalists will not be easy because the former will not play in the Champions League next season..

Even though Chelsea qualified for the top tier club competition in Europe, they are not currently banned from registering new players for the next two transfer windows and are awaiting a verdict from CAS. 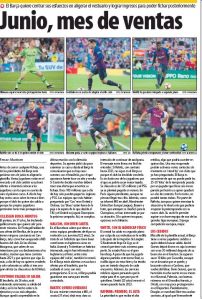 Therefore, ‘it gets complicated’ for Manchester United and Chelsea.