Borussia Dortmund want in excess of €100m as a fixed fee for Jadon Sancho, but Manchester United are reluctant to meet their demands.

Two days ago, The Athletic explained the Old Trafford club view Barcelona’s Ousmane Dembélé ‘could be a less expensive alternative to Sancho’. No additional information was mentioned regarding the Frenchman.

Mundo Deportivo have relayed these claims and have also provided their own information on the 23-year-old’s situation.

Apart from the World Cup winner’s technical qualities, he would be much cheaper than Sancho.

According to the newspaper, the La Liga winners could settle for a €60m fee to sanction his sale.

It’s claimed United’s interest in Dembélé is ‘not new’ as they wanted to sign him before he moved to the Camp Nou in 2017. Concern over his fitness meant United wanted to be ‘very sure’ before taking the final step.

The France international has constantly struggled with injuries at Barca and it’s stated his presence could slow the development of youngsters [like Anust Fati, Pedri and Francisco Trincão]. 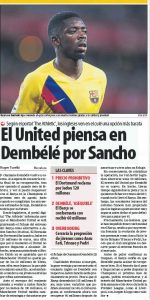 These two factors have convinced Barca to make him available in the transfer market.

As per Mundo’s report, Manchester United were concerned about Dembélé’s injury record and that’s why they didn’t take the final step to sign him in 2017.

There has been no improvement with regards to the attacker’s fitness at the Catalan club. Therefore, it hardly makes sense for Ole Gunnar Solskjaer’s side to invest €60m on signing the Barcelona player this summer.