We thought we’d be done with Bruno Fernandes stories for a while, but since newspaper Record sent a writer to follow the midfielder’s start at Manchester United, Sport Witness couldn’t get a rest.

A story from the Portuguese newspaper today says that the player is ‘absolutely delighted’ with his first match in the Premier League.

It’s claimed that Bruno was ‘outraged’ at not scoring a chance he had in the 0-0 draw against Wolverhampton Wanderers on Saturday. Still, he felt ‘enthusiasm’ for things going well and being picked as the man of the match.

Record says the ‘rythm and intensity’ of the Premier League match have both surprised the player as well. 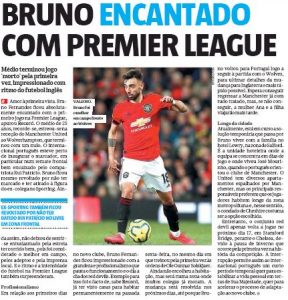 Record says Bruno also was surprised with the ‘greatness and professionalism’ of Manchester United, since he was able to see houses on Friday, the same day when he had the first training session under Ole Gunnar Solskjaer.

The midfielder returned to Portugal after the match against Wolverhampton, and expects to travel back to England with a new house sorted, so he’s able to move with his wife and his daughter.

Otherwise, he’ll continue living at the Lowry Hotel and his family will move later.