The Alexis Sánchez saga hasn’t really had big updates in the past few days, and that’s exactly the subject brought by the Italian media today.

Local newspaper say the negotiations haven’t advanced much due to Manchester United’s demands regarding the attacker’s salary.

Newspaper Tuttosport says the Red Devils have taken a ‘step back’ in the talks with Inter Milan. After accepting to loan Sánchez with an option to buy, they started asking the Italian side to pay for a bigger part of his wages.

Inter are said to still be ‘optimistic’, as the club’s lawyers work to find a solution to make everyone happy. 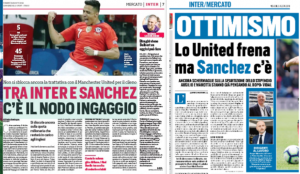 Corriere Dello Sport has a more complete story. They say the salary issue is real, and Man United are even wanting Sánchez to give them a discount so the move can be done more easily.

It’s also claimed the Red Devils are worried the player could find his old form in Milan, just like Romelu Lukaku, as that would make the club look bad in the media.

Still, there’s no intention of keeping Sánchez, and the club could even bring a free agent to replace him in the squad, but they are being patient during the talks, and it means it could be dragged until the next week.

Then in the afternoon, website FC Inter News released an update saying a meeting between Inter Milan, Ed Woodward and Sánchez’s agent Fernando Felicevich has been ‘planned’.

The Chile international is ready to make the move, and has been asking Matteo Darmian about life in Milan.

“We’ll make more noise than them” – Club Brugge fans in...