How Corriere dello Sport have information about Juan Mata’s Manchester United future when the Spanish or the English press don’t is beyond us, but their Wednesday edition suggests he isn’t going to be at Old Trafford for much longer.

Looking at all the players that could be available on a free in the coming months, the Italian newspaper spend a bit more time on the Spaniard than the other Red Devils (such as Daley Blind and Ander Herrera) because they ‘won’t negotiate with him’.

Bought for around £40m back in 2014, the 29-year-old has remained a viable option for José Mourinho this season, but the fact he was ‘offered’ to Inter recently suggests he won’t be beyond the current campaign. 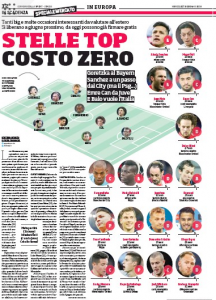 Corriere state Manchester United have already tried to include him in some January deals (we assume other than the Inter one), as they look to bolster their squad for the second half of the season.

The former Chelsea playmaker has appeared 22 times for the Red Devils so far this campaign, scoring three goals and picking up four assists along the way.