Manchester United have already started their preseason preparation. They do so without Paul Pogba, who isn’t due back at Carrington yet.

Zinedine Zidane wants the 26-year-old at Real Madrid next season and Florentino Perez will try his best to fulfil his manager’s request.

The Red Devils will travel to Perth on Sunday and there have been suggestions the World Cup winner will be on the plane to Australia.

Mundo Deportivo claims the France international is not keen on travelling with the English club for the preseason tour, and Los Blancos are attentive to his situation.

The La Liga giants are waiting for a gesture from the former Juventus star in order to push for his signing.

It is claimed the midfielder is set to hold talks with Ole Gunnar Solskjaer and will ask for a move away from Old Trafford, but the Premier League side view him as non-transferable.

This is where Real Madrid expects a final gesture from Pogba by handing in a written transfer request to leave United.

Mundo claim the Spanish club believe Solskjaer’s side ‘will have no choice but to negotiate’ for Pogba’s sale, if he hands in a transfer request. 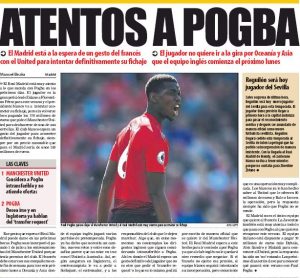 For years, there’s been a mythical view in Spain on how a transfer request works in English football.

They wrongly believe it forces a club into talks over a sale, when in reality it means little to nothing.