Home Europe Manchester United ‘will manifest themselves’ for Serie A star if ‘avenue opens’,...
SHARE

When Paulo Dybala arrived from Palermo, he did so as the next best thing, and, to a certain extent, he’s lived up to that.

The young Argentine has performed well under Max Allegri, yet this season has been very different, scoring just two goals in 19 league appearances, which is some way off his record from last year when he bagged 22 in 33.

This form has changed his status at the club, according to Corriere dello Sport, meaning he isn’t ‘untouchable’ any longer, and clubs like Manchester United are said to be circling.

Let us make one thing clear, however, which is that nowhere in this article does it say the Red Devils will make a move in the near future, or are outright planning to do so, and we will also point out clubs like Real Madrid are also mentioned as ‘interested’. 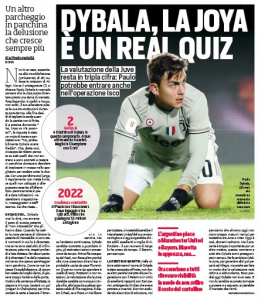 None of this will shock you, but it needs reminding as these stories get twisted very easily by more, let’s say, ‘sensationalist’, to put it nicely, members of the press.

Back to the story, which states that ‘should an avenue open’, then Manchester United will ‘manifest themselves’ for Dybala, whose value will be in the nine figure ball park.

Ole Gunnar Solskjaer’s side are reportedly ‘just behind’ Florentino Pérez and co., and (this is us speculating, not Corriere) would surely use a certain Paul Pogba to try and convince the Argentina international to choose Old Trafford over Santiago Bernabeu.

We aren’t there yet, however, and we doubt we will ever be, but football is football and stuff like this sometimes happens.

We’ll just have to wait and see if this ‘avenue’ opens in the near future.

For now, it doesn’t appear to be.