It was widely reported in England Spain that Manchester United were interested in Atlético Madrid’s Kieran Trippier during the last window.

The Red Devils couldn’t conclude the deal for the right-back because the La Liga winners weren’t willing to negotiate his transfer.

AS on Saturday explain Los Rojiblancos were successful in keeping majority of the squad, despite approaches made to acquire the services of some of their players.

When discussing about the right-back, the report says the 30-year-old was ‘object of desire’ for Ole Gunnar Solskjaer’s side, who ‘tried until the last minute to sign him’. The England international is ‘vital’ player for the Atlético and will continue under the orders of Diego Simeone. 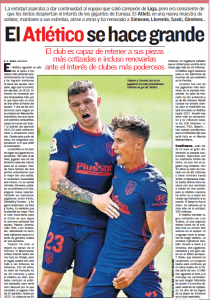 Even though the Old Trafford club tried until the end to sign the ex-Burnley man, the Spanish champions ‘managed to retain him’, at a time when many predicted he would ‘end up’ in the Premier League.

AS say Trippier’s current deal will run down in 2023 and the contract includes a €60m release clause.

On Friday, Mundo Deportivo reported United are ‘expected to return’ to sign the fullback in January.