Home Europe Man United and Tottenham could bid €70m for midfielder in January, would...
SHARE

Despite Bruno Fernandes staying at Sporting this summer, we didn’t his transfer saga would be over, and probably, neither did you.

The player is said to be negotiating a new contract with the Lions, but it doesn’t mean he has stopped being linked to the likes of Manchester United and Tottenham Hotspur.

Portuguese newspaper Correio da Manhã brings a story today about his new deal. Since Sporting rejected Spurs’ offer for him, they should pay him a fine of €5m, as previously agreed in the contract.

It’s said the Lions are trying to reduce this amount, and everything is going well with Fernandes’ agents, as they should soon find an agreement. His release clause will be kept at €100m, though. 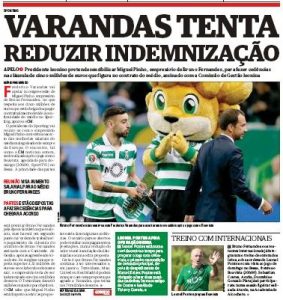 But a new contract doesn’t mean Bruno will stay for much longer. Correio da Manhã says the player ‘continues to have’ clubs interested in signing him.

Tottenham, Real Madrid or Manchester United are those who can make a good bid in January, offering the €70m which would convince Sporting to sell.

There’s no information on new contacts with these clubs, but the Portuguese press remains confident that something could still happen soon.