Over the weekend, it was reported by Tuttosport that Manchester United had seemingly made a new offer for Ivan Perisic, upping their initial €30m bid to €40m, which still isn’t enough to convince Inter Milan to sell, for now.

What might convince them to push the transfer forward and for a bit less, however, is the fact that the winger himself doesn’t exactly want to be there next year, despite his new manager’s request to stay at his disposal for the upcoming campaign.

According to Corriere dello Sport in Italy, the Croatia international is ‘indifferent’ to Luciano Spalletti’s demands, and only has one thing in mind: the Premier League and Manchester United.

The Italian newspaper keep in line with what has already been reported, which is that Perisic has already agreed terms with the Red Devils, which will see him earn double what he currently pockets at the San Siro. 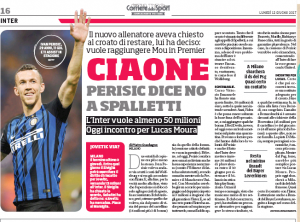 However, in order to complete his move to Old Trafford, the player is going to have to wait until Ed Woodward ups United’s offer for the player.

Inter Milan are still said to be expecting €50m for their star, but the closer we get to the 30th of June and with no other departures seemingly close, that could change considerably.

As things stand, Inter Milan still need to raise €30m by the end of the month in order to comply with Financial Fair Play regulations, and the sale of Perisic is meant to give them the money required.

The alternative plan was to sell four players, but that takes a lot more effort and work than just the one, and we could quickly see them change their mind in the coming week or so if the likes of Marcelo Brozovic or Jonathan Biabiany don’t attract any offers soon.