Home Europe Man United ‘have had talks’ with club about €40m forward ‘in recent...
SHARE

As we edge nearer to the January transfer window, the case of Dujan Kulusevski continues to grow, with the Atalanta loanee (currently at Parma) impressing in Serie A.

Just this week, the 19-year-old stole the show on Sunday when he scored and assisted a goal in his side’s 2-1 away win against Gennaro Gattuso’s Napoli, once again showing why so many clubs, including Manchester United, are interested in him.

The Old Trafford side aren’t the only ones, with Inter and Juventus also in the mix, and Gazzetta dello Sport explain all three have already spoken with Atalanta about the young Swede.

They explicitly state Atalanta have ‘had talks’ with the Serie A champions and Manchester United ‘in recent weeks’, and it’s believed the Bergamo based side value their starlet at around €40m. 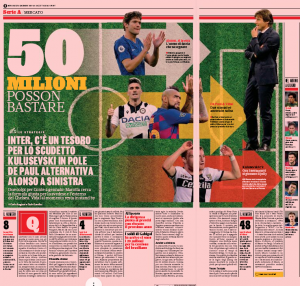 Because of United and Juventus circling, Inter are aware they need to act fast if they want to beat the competition, but will have to wait until the new year to go knocking on Antonio Percassi’s door with the right offer.

As for Manchester United in all this, we all know they have the money required to get Kulusevski.

The big questions, however, are whether they actually make a move for him, and if they do, will he want to join them over a stay in Italy, where he clearly feels at home and is enjoying himself.