Before they acquired Harry Maguire from Leicester City, there was a rather lengthy spell where it looked like Manchester United would be going all in for Matthijs De Ligt.

The young Dutchman was the star at Ajax, and a number of clubs were after his services, with Juventus eventually winning the race.

The 20-year-old has enjoyed a decent first season in Turin without setting the league alight, and there might have been some hope they could cash in early because of his occasional mistakes, but that isn’t going to happen.

Corriere dello Sport have an article on the matter on Wednesday, explaining that ‘in spite of the pressing from Manchester United but especially Barcelona’, the player ‘only has the Bianconeri in mind’.

His great dream is to win the Champions League, and it seems he feels more likely to achieve that goal where he currently is than with the Premier League side (understandable at this stage) or the La Liga champions. 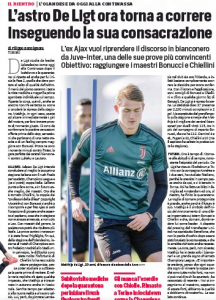 Corriere point out both the Red Devils and Barcelona ‘don’t lose sight’ of him, although it would be really hard for them to do so, since he’s a prominent member of a top European club.

For Juventus, De Ligt ‘is the symbol of the beginning of the renewal’ of their defence, with both Leonardo Bonucci and Giorgio Chiellini reaching the back end of their careers.

That’s why they have no intention of getting rid of him, regardless of United’s apparent ‘pressing’ or Barcelona still wanting to sign him after failing to secure his services last summer.