Needing a winger to bolster their attack, Manchester United, during the January transfer period, were linked with Yannick Carrasco.

The Belgian, currently in China with Dalian Yifang, has made it clear he would like a return to Europe in the near future, alerting a number of clubs, including the Red Devils, Arsenal and Inter.

With the January window now shut, Carrasco will have to wait until the end of the current campaign to get his move, and Manchester United could still be interested.

This is what Corriere dello Sport claim on Wednesday, stating Ole Gunnar Solskjaer’s side are still lurking ‘in the background’ as Milan try to get closer to the Belgium international. 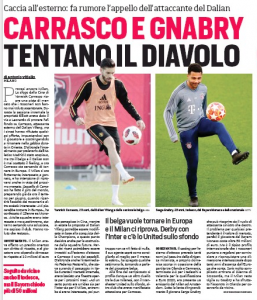 The stumbling block for the Serie A side remains the player’s wages, currently standing at around €10m/year.

However, should Milan qualify for the Champions League, which they are currently on course to do, things could change, with more funds at their disposal.

As we all know, down Manchester United’s end, salary isn’t exactly an issue.