Unless Paul Pogba signs an extension at Manchester United, the Frenchman is going to be linked with a move away from Old Trafford all summer.

The midfielder has less than a year left on his contract, which certain clubs see as the perfect opportunity to get him at a slightly more reasonable price, and that includes Paris Saint-Germain.

It’s no secret the Ligue 1 champions would love to bring Pogba back to France and his native Paris region, but Manchester United stand in their way, who are reluctant to let their star player go.

L’Equipe, looking at Paris Saint-Germain’s situation on the transfer market, make it clear sales need to take place this summer, but they ‘aren’t giving up hope’ about signing him. 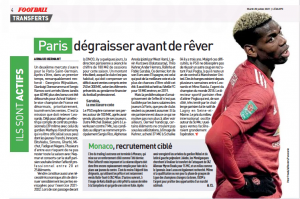 It’s explained ‘exchanges exist for weeks between Leonardo and Mino Raiola’, and the club chief ‘dreams of attracting Pogba’, who is said to be ‘very tempted by the Parisian challenge’.

The belief is his price is around €50m, but their readers are quickly reminded that ‘a few sales would greatly facilitate the operation’.

Until they do that, however, Manchester United can rest easy.