During José Mourinho’s era at Manchester United, club scouts watched all of Benfica’s games. The Red Devils would always get a mention in the emissaries list, even though there was never a clear target reported.

Southampton, on the other hand, aren’t a regular club in these lists, but often get a mention watching local games as well. Local newspapers hardly know who the Saints are scouting, though.

But United and Southampton have done a joint mission this Wednesday night, according to O Jogo. The outlet says that scouts from both Premier League clubs were watching Shoya Nakajima from Portimonense.

O Jogo writes that the Japanese star has been wanted by Saints, and now the Red Devils have joined the race for him as well. 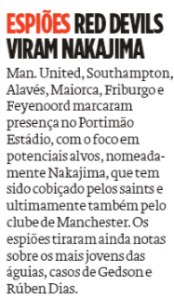 Nakajima had a big part in the 2-0 win over Benfica, making an assist to Jackson Martinez for the second goal.

The midfielder should now be off to play the Asian Cup for Japan. He’s been heavily linked to the likes of Leicester City and Wolverhampton Wanderers in the past couple of months as well.

O Jogo adds the scouts were also keeping an eye on Benfica’s young stars, which would be the case of Gedson and Ruben Dias.