One of the trends people have noticed over the past year or so is how Manchester United have been using Serie A clubs as a ‘dumping ground’, if you will.

Inter have been the main beneficiaries of this, bringing in Romelu Lukaku, Alexis Sánchez and Ashley Young and Matteo Darmian (via Parma) to the club, while Andreas Pereira has joined Lazio, Diogo Dalot ended up in Milan and Chris Smalling was transferred permanently to Roma a few days ago.

In the meantime, United have struggled to put up a fight for any kind of title under Ole Gunnar Solskjaer, even if Bruno Fernandes gave them some hope of a potential resurgence towards the back end of last season.

Unfortunately, the start to the current campaign hasn’t exactly been exemplary, and Italian journalist Paolo Condò believes a lot is down to a split in the dressing room at Old Trafford.

Writing in La Repubblica, he speculates there’s a good chance things could get even worse for the Red Devils if they carry on as they are.

He says: “If things don’t improve, the next transfer window will be used by someone to attack Matić, and in the background remains the boulder of Pogba’s contract expiration, set at 2021.

“The players, then, talk to each other. Lukaku was tired of United because Pogba and Martial were struggling to pass him the ball, a picture of a dressing room divided in groups. When Sánchez and Young asked him before signing how things were at Inter, the first answer was ‘really good, there are no clans’. Times have really changed.” 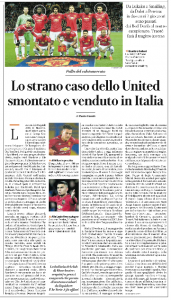 Unity was often a key factor under Sir Alex Ferguson throughout his time as manager at Manchester United, and it’s fair to say things simply haven’t been the same since his departure, with power struggles consistently taking place behind the scenes at the club.

This partly comes from their continuous attempts at quick fixes, using big signings with high wages, which haven’t worked, leaving them with situations like Sánchez’s where other clubs, mostly Italian ones, end up benefitting from their mistakes.

Condò isn’t complaining, since Serie A gets good players out of all this, but merely pointing out how that if things continue the way they are, it could go from bad to worse on the red side of Manchester.