Manchester United’s pursuit for Porto left-back Alex Telles seems to be stuck in that same obstacle: his price.

There are two Portuguese newspapers who bring interesting updates on the situation today, and both say the Red Devils are struggling to match the figures demanded by the Dragons.

Let’s start with A Bola, who seem to be the most optimistic about a deal.

They bring a headline saying Telles ‘should still play the derby’ against Boavista at the weekend.

The outlet claims that Manchester United are ‘hurrying’ to sign the Brazilian, but as the club want to take advantage of the player’s contract, which expires in a year, they don’t want to reach the price demanded by Porto.

The Dragons ‘admit’ selling the 27-year-old, but for between €20m and €25m. They’re still waiting for an offer from Manchester United, and ‘don’t mind letting the process drag to the limit’.

It’s said the contacts were ‘intensified’ in the past few days, especially because the Red Devils lost the race for Sergio Reguilón and were defeated by Crystal Palace in the first fixture of the Premier League. 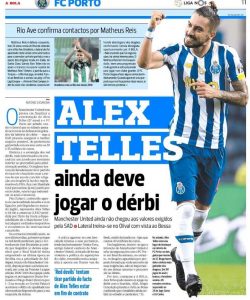 Newspaper Correio da Manhã brings an issue which had been discussed by the Sport Witness team just yesterday.

That’s how much Porto will really get with the move.

The outlet points out that Alex Telles’ former club Galatasaray have the right of 10% of that amount.

There’s also the commission from agents Pini Zahavi, who represents the player, and Jorge Mendes, who’s sorting the entire process. The representatives will split a share of 15%.

That means Porto are losing 25% of the fee. 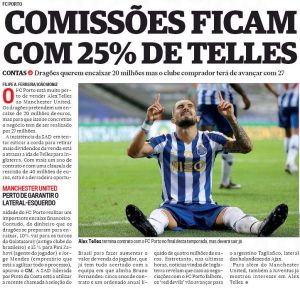 So for Porto to get the €20m they want, Manchester United would need to pay €27m. The Dragons’ demands are ‘delaying’ the possibility of a deal, and according to Correio da Manhã, the Portuguese club are using the player’s latest call-up for the national team as another argument why he’s worth the investment.

They also claim that Telles already has a personal agreement with the Red Devils, as he’d sign a five-year deal worth €4m per season.