Much like Chris Smalling, Alexis Sánchez is in a precarious position when it comes to his future at Inter.

His deal with the Serie A side technically ends today, June 30th, and it was up to the two clubs to find some sort of agreement to extend it.

They finally have done, it seems, but it’s certainly not the prettiest of accords, as Manchester United are still being very awkward when it comes to the Europa League.

Corriere dello Sport cover the situation in as much detail as possible in their newspaper, explaining that ‘for the moment, the problem does not arise’, but it could ‘when the Europa League draw’ takes place on July 10th.

It’s pointed out that ‘in the event of a meeting with Inter, United is not inclined to extend the loan beyond August 6th’ or, as an alternative, ‘would like to insert a clause which would prevent Sánchez from taking the field in the direct clash’ between the two sides.

That means he would be allowed to play in the other Europa League games, just not against the Red Devils. 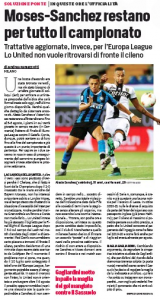 It’s said this ‘would be a total violation of FIFA’s indication to teams to end the season without altering the staff’, but ‘since there is no international standard’, it seems United are in a position to ask for it if they so wish.

However, ‘finding an agreement on this point with just a few hours available would have been impossible’, so the two sides have allegedly signed a ‘bridge agreement’ and said they would ‘update each other in the coming weeks’.

For Antonio Conte, this means he can count on Sánchez in the upcoming game against Brescia, so there is some good news in all of this.

As for the Chile international, it seems he will be able to finish the league campaign at the very least, and the rest will depend entirely on what Ed Woodward and Beppe Marotta agree to behind the scenes when it comes to European competitions.