It’s been happening for some years now and continues to this day. Literally.

Sunday’s edition of L’Equipe covers what may become of the striker’s future. He’s currently in Uruguay, chilling out in the wilderness, and can use the break due to Covid-19 as a time to reflect and decide.

After falling out with PSG during the January window, because they wouldn’t let him move to Atletico Madrid, it’s stated a stay in Paris isn’t ruled out. That said, the Ligue 1 club hasn’t been in touch about a renewal, despite his contract expiring at the end of June.

Given how their finances have been hit, it’s possible PSG could ditch the idea of signing Mauro Icardi permanently and instead renew Cavani. 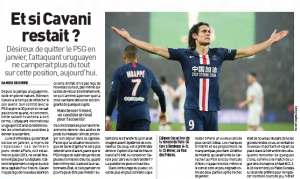 Manchester United are presented as a ‘serious candidate’ for the player, and it’s stated the club have the ‘significant financial means’ needed to get deals done this summer.

Despite that, there doesn’t feel a great deal in this one.