With Marouane Fellaini seemingly refusing to sign a new deal at Manchester United, and the Red Devils reluctant to sell him in January, the Belgian midfielder could end up leaving Old Trafford on a free next summer.

If that were to happen, then a new midfielder would have to be brought in, and that man could be Lazio’s Sergej Milinkovic-Savic.

José Mourinho’s interest in the Serbian midfielder is nothing new, with many reports stating the Portuguese manager is a big fan of the young footballer, and that was once again emphasised over the weekend, as Il Messaggero claim a Manchester United scout was present in the stands to see Lazio beat Sampdoria 2-1 away from home.

Their decision to do so was justified, as the 22-year-old midfielder got his team back in the game in the 79th minute by scoring the equaliser, with Felipe Caicedo scoring the winner 11 minutes later. 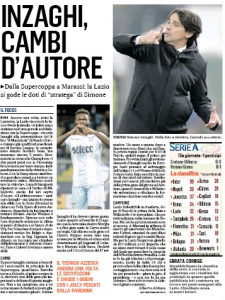 Il Messaggero make sure to reassure their readers by emphasising Lazio won’t let him go on the cheap if they were to sell him, with a €100m price tag quoted, which Manchester United have already shown they are willing to spend on the right player.

Earlier claims stated Mourinho is ‘enchanted’ by the player’s development, and ‘ready to launch an offensive’ next summer. At 6ft 4in, Milinkovic-Savic could provide the physicality Fellaini’s exit would see Manchester United lose.

Lazio, down their end, know they won’t be able to hold onto their new star forever, and Il Messaggero report the Serie A club have already paid Genk €9m to cancel out a clause that would have seen the Belgian side receive 50% of any future fee.

It won’t happen in January, but there’s every chance the Italian side could have a very difficult decision to make in the near future regarding the Serbia international.

First, though, someone needs to make a bid that matches their valuation.