With the Red Devils constantly scouting the Eagles, we’ve recently pointed out that they had officials in two games where the striker had scored two goals each, one of them in the Champions League clash against Barcelona.

Som as the Premier League giants were back at the Estádio da Luz this weekend, newspaper A Bola say the emissaries were there ‘precisely with the mission of spying Darwin Nuñez’.

The visit, however, wasn’t so fruitful this time because Benfica not only lost 1-0 to Portimonense at home, but the forward also had a disappointing performance.

The striker never created the plays he’s used to and failed when finishing the chances he received. His performance was gently criticised by the local media, with newspaper Record saying he had ‘more will than head’ last night. 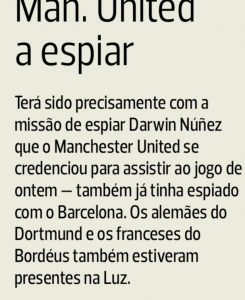 So Nunez continues to have six goals in eight games for Benfica this season, and now travels to South America, where he and Edinson Cavani are taking part in Uruguay’s matches for the World Cup Qualifiers.

With the Portuguese media writing for the first time that Manchester United are interested in his performances, we can now probably wait for a series of rumours about this chase, especially with the Red Devils scouting Benfica so often.