Home Europe Man United have ‘seduced’ player – Transfer decision to be made before...
SHARE

As Bruno Fernandes has joined Sporting’s squad for the preseason today, all the Portuguese newspapers have stories about him.

And it’s been impossible to write about the 24-year-old without mentioning Manchester United, so all the articles end up being transfer stories.

Despite recent claims from Italy saying Bruno Fernandes has a personal agreement with the Red Devils, newspaper Record comes up saying the claims are not true. They also write that Sporting haven’t received any bids for the midfielder so far.

Meanwhile, newspaper O Jogo claims that agent Miguel Pinho is currently in England, where he shall receive official bids from Manchester United and Tottenham. These offers are expected to get to Sporting in the next few days. 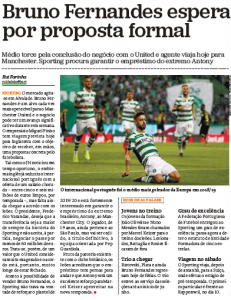 Jornal de Notícias brings some different information, saying Pinho is only flying to England today. They say United have already ‘seduced’ the player, since they’ve offered him between €5m and €6m net per season. However, the Lions keep demanding €60m for the transfer, and the Red Devils are far from offering that amount.

And finally, newspaper Correio da Manhã talks about Bruno’s possible stay at Alvalade. They explain the clause which says that if Sporting reject an offer of €35m or above, his agent gets paid €5m, and his salary is renewed until 2024, going from €3m net to €6m gross per season. They also say Miguel Pinho is in England to receive offers from Manchester United and Tottenham, and president Federico Varandas has until July 7th, the day of Sporting’s departure to Switzerland, to decide if he’s selling Bruno Fernandes.