Cristian Romero to Manchester United continues to be a thing in Italy.

It’s no secret the Red Devils are looking for a new centre-back, and while they continue to be linked to Raphaël Varane, the Premier League side have their attention turned on the Atalanta starlet.

Loaned for two years by Juventus for the season with an option to buy at €16m, the defender excelled in Bergamo, to the point where they were convinced to trigger the clause a year early.

His performances attracted interested from the Premier League, with Manchester United the strongest link of late, although the likes of Liverpool have also been mentioned here and there.

The Anfield side’s acquisition of Ibrahima Konaté suggests they won’t be making a big move for Romero, leaving Manchester United ‘still at the window’ for the Atalanta loanee. 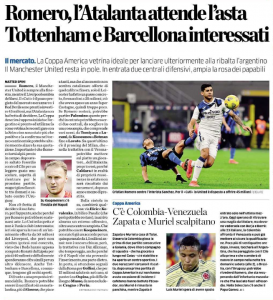 L’Eco Di Bergamo are the ones reporting this, claiming the Red Devils are still ‘ready to invest €45m’ in the player, although the Serie A side ‘aren’t in a rush to decide’.

Romero is currently with the Argentina squad for the Copa America, and the Italians intend to use the tournament as a platform for him to perform before sorting out his future.

They know full well that if he has a great few games, his price will soar.

Manchester United will have to wait for now.