Late on Saturday evening, we covered claims from Turkey that Talisca has agreed to join Manchester United.

The Brazilian attacking midfielder is on loan at Besiktas from Benfica, with the Turkish club having a €21m buying clause.

Regardless of whether Besiktas can manage to pay that or not, and then get the player to sign his own deal, it’s not currently expected that Talisca will be at the club next season.

That’s because there’s growing interest from elsewhere. Whereas once Talisca transfer claims were overhyped, now his form in Turkey gives them some justification.

Saturday evening saw a series of Turkish claims which made a Manchester United transfer sound possible.

Firat Gunayer, a Turkish journalist who covers Besiktas, claimed the Brazilian has agreed to sign for Jose Mourinho’s side.

Turkish outlet Sporx quoted Besiktas manager Senol Gunes as saying: “I am sorry that Talisca is gone, he’ll be a competitor to Cenk Tosun in the Premier League.”

Gunes was also quoted in an exchange with a journalist:

‘Reporter: Can you tell us will Talisca join Roma?

Gunes: I can’t tell. But he could be a rival to Cenk Tosun.

Mourinho is a long time fan of Talisca, and has gone on record several times to confirm that. According to Sunday’s edition of O Jogo, that interest has turned concrete and Manchester United have submitted a €40m offer to Benfica, which sounds more than enough.

With Besiktas having their €21m buying clause, it’s completely within the realms of possibility that a club could tell the Turkish to use it, and then offer up something like €30m and the chance for a quick profit. Such a scenario has been been presented previously, but O Jogo don’t mention it today. 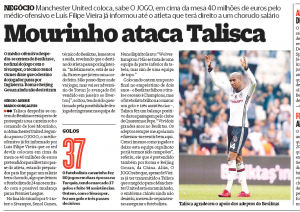 The Lisbon club’s president Luís Filipe Vieira has told Talisca about the offer and that negotiations are ongoing to close a deal, which has left the player ‘excited’. However, it’s stated Beijing Gouan and AS Roma haven’t given up.

It wouldn’t be unthinkable that the Benfica president would encourage the idea of Manchester United interest to then ultimately get more money from elsewhere. That said, Mourinho’s interest goes back some way and that will always underpin the links.

Reaction to Celtic draw in Denmark: ‘Rhythm and confidence’ not enough, VAR ‘worked to perfection’

Reaction to Celtic draw in Denmark: ‘Rhythm and confidence’ not enough,...