It was only a matter of time before a big story surrounding Manchester United and Ivan Perisic got published following José Mourinho’s international break trip to Croatia, and now we have it.

Gazzetta dello Sport throw everything they’ve got at it, spreading the story over a page and a half, including pictures of Mourinho and the Croatian forward alongside graphics and everything.

The Italian newspaper go big in the headline as well, with the amount Manchester United are prepared to spend on the 28-year-old in capital letters: €60m.

According to Gazzetta, José Mourinho has made it clear he wants to strengthen his squad considerably over the summer, and the Inter Milan forward is high up on his list, with the amount a show of intent to other interested clubs, including Antonio Conte’s Chelsea.

They claim Manchester United made their interest in the player clear a few weeks ago, and are determined to wrap up the deal as soon as possible, yet Inter Milan aren’t saying yes just yet. 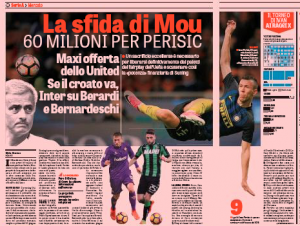 Of course, the amount of money getting readied would be enough to convince them to sell, but the Serie A side will only let their star go if they have a replacement in the pipeline.

The idea here would be to use Manchester United’s money to buy both Federico Bernardeschi from Fiorentina and Domenico Berardi from Sassuolo for a combined €70m.

One of them is bound to arrive regardless of what happens, with the latter at the top of Pioli’s list, but Gazzetta get a bit excited at the thought of the two Italian forwards playing alongside a 24-year-old Icardi next season, which could happen were Perisic to be sold.

This is undoubtedly the first of many stories involving the Inter forward and a move to the Premier League, and rest assured we’ll be covering them as they pop up.