David De Gea having a wobble, or having several wobbles, was always going to lead to one thing… Manchester United being linked with Jan Oblak.

As sure as night follows day. As sure as any UK sunny spell is followed by the punishment of cold, grey and wet revenge from the Weather Gods. This was a natural progression.

It’s already happened, and Marca feel obliged to pick up on it today.

There’s ‘danger’ from Manchester, according to the Spanish newspaper.

Manchester United eyeing Oblak, and their City neighbours being keen on Rodri.

The goalkeeper recently renewed his contract, and Marca say the increase in release clause, from €100m to €120m, was ‘symbolic’. It leaves the door ajar, which United would be ‘prepared to sneak through’.

The €100m+ fee is said to be no problem for the Premier League club, and the same goes for the player’s €10m+ (after tax) wages.

Oblak is one of the players Atletico want to build their future on, so they’d try and convince him to stay, which would likely involve keeping Rodri too.

Marca make it very clear that all this depends on De Gea’s ‘arduous’ contract negotiations. 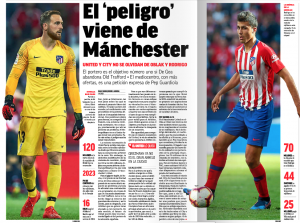 It’s not been mentioned yet, but the next tangent for this story could well be ‘MAN UNITED TO OFFER DE GEA TO BRING OBLAK PRICE DOWN’.

You know how it works.

Back to Rodri, Marca point out they reported weeks ago that United are one of a number of clubs ready to pay €70m for the midfielder. They offer nothing new on that.