Yes, we know that you’re bored of Manchester United being linked with Sergej Milinković-Savić, and we’re getting to that stage where writing about him and a potential move to Old Trafford is getting less exciting by the day.

However, it’s a story that cannot be ignored, because it makes a lot of sense, at least on paper.

After all, Paul Pogba will need replacing at Manchester United should he decide against renewing and leave on a free, with the Serbian widely seen as an ideal replacement for the Frenchman, capable of providing goals and assists in attack, all the while proving efficient when it comes to defending.

He’s also cheaper than previous years, with a fee of €65-70m touted in reports, because his contract expires in 2024 and Lazio aren’t going to hold out for too much since he doesn’t look overly keen on renewing his current deal.

Therefore, the club are planning a sale this summer, with Maurizio Sarri prepared for it, because selling the midfielder could bring in the money needed to restructure the squad to his taste.

Corriere dello Sport look at it on Friday, claiming that six to seven signings are being planned to mould the team, and the sale of Milinković-Savić would fund those. 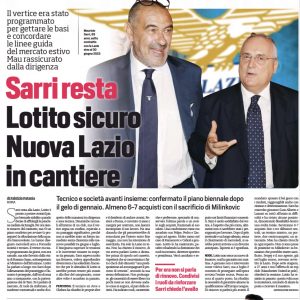 In fact, the Serbian is pretty much expecting to leave in the coming months, as the newspaper explain he ‘knows very well he could be sacrificed’, having already warned Lazio last July alongside his agent, Mateja Kezman, that an exit was on the cards.

That’s because ‘after seven seasons, at 27 and with the offer of a top club (Manchester United in pole position), he will ask for the sale’.

While Claudio Lotito, the club’s owner, may have ‘resisted’ in the past, doing so now would be counter productive, and it’s made clear he will ‘not chain’ his star asset this summer.