One and a half year ago, when Alexis Sanchez was switching Arsenal for Manchester United, we’ve covered several stories from Chilean newspaper El Mercurio encouraging the transfer.

The player’s home country media was pretty confident that he could relaunch his career at a new club, with the Gunners often getting some stick during the negotiations.

Now something similar happens with his departure from Manchester United. As El Mercurio brings a story reporting Sanchez’s move to Inter Milan, they say it’s the end of his ‘nightmare’ in Manchester.

They write the ‘Nino Maravilla’ wants to be ‘reborn’ and ‘take back his confidence’ under ‘experienced manager’ Antonio Conte. 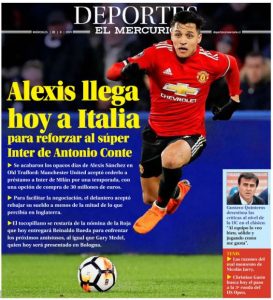 El Mercurio also claims that according to people close to Sanchez, he will be taking the number seven jersey at Inter Milan.

The problem is Mauro Icardi has already been presented with it, and since his departure from the Nerazzurri isn’t done yet, there could be some tension during the Chilean’s arrival at the club.