Every single transfer window, the full-back is heavily, and we mean that word to its fullest, linked with a return to Italy, only for either the Red Devils to stand in his way with difficult-to-meet asking prices or for interested clubs to find other targets.

This summer is no different, as the 29-year-old enters the final year of his contract at Old Trafford, and his pool of options is getting smaller and smaller.

In fact, Corriere dello Sport on Monday explain Lazio might be his ‘only possible destination’ in Serie A in the coming months. 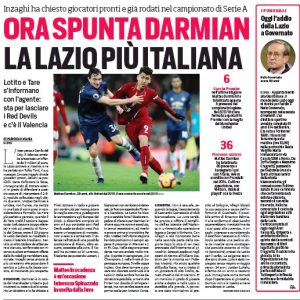 The Italian club have added Darmian to their list of targets, and have already reached out to the player’s agent, Tullio Tinti, about trying to get something done.

The defender has given his representative the task of finding him a landing spot in his home country where he could relaunch his career, with the ultimate goal of making Italy’s squad for the 2020 Euros.

No price is mentioned, but we’ve reached the stage where Manchester United have no choice but to go along with their player’s wishes, seeing as it’s their last chance to make any (decent) money from him before potentially losing him on a free if he stays beyond January 2020.

Let’s all cross our fingers for Matteo.