Despite reports AS Roma want to either renew Chris Smalling’s loan or try and convince Manchester United to agree a lower price than their €20-25m asking fee, Corriere dello Sport on Monday reckon the efforts put in by Gianluca Petrachi is becoming more and more futile.

The Serie A club’s director of football has worked hard to try and find a way to keep the England international around, but the Covid-19 pandemic has changed everything.

Prior to the lockdowns and the worldwide panic, Smalling was open to staying in Italy’s capital, but now that he’s separated from the rest of his family, things are different.

Corriere dello Sport explain the pandemic is ‘pushing him to return to England for personal motives’, and once the quarantine is over ‘he will ask his agent to find him a team in the Premier League’.

It’s stated Arsenal are ‘at the front of the line’, as they are in ‘his’ London. 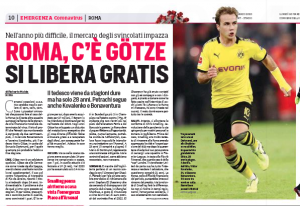 As for Manchester United in all this, they would much rather sell him permanently if they can, which is a problem for Roma who can’t really afford him.

Corriere make it clear at the end that ‘Smalling’s desire will make the difference’, and a lot could rest on how long the Covid-19 crisis goes on for.