If you’re a regular Sport Witness reader you may be aware we’ve been covering the Dutch reaction to Donny van de Beek’s first season at Manchester United.

The vast majority of the coverage has been very calm, explaining the midfielder has been getting minutes and needs to be patient given the options available to Ole Gunnar Solskjaer.

Van de Beek’s last minutes came on December 23rd, with him starting against Everton in the EFL Cup. His last Premier League minutes were as a substitute as Manchester United beat Leeds United 6-2 on December 20th.

That he didn’t get minutes over the Christmas and New Year period has caused alarm for some in the Netherlands, with Valentijn Driessen perhaps chief among those concerned.

The De Telegraaf columnist has written for the newspaper’s Monday edition, and highlighted how former Ajax stars have been struggling around Europe since leaving the Dutch club. 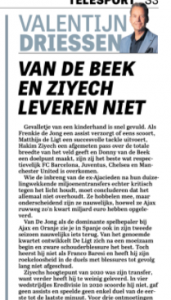 Van de Beek is given special attention, and Driessen states that he should ‘pack his bags straightaway’ if he doesn’t feature against Manchester City in the EFL Cup this week. This, of course, could all be worthless, given the player is likely to get on the pitch for the derby.

Driessen goes on to say that if ‘Solskjaer continues to ignore him’ then Van de Beek’s role at the postponed Euro 2020 will be in danger.