When it comes to Athletic Club Bilbao, the source to trust is El Correo.

For years the local Basque newspaper have been ahead when it comes to claims about transfers in and out of the club, such as Aymeric Laporte’s move to Manchester City.

So, that they’ve got Ander Herrera splashed across the front of their sport section means something. It certainly means a lot more than the half baked links between the player and other Spanish clubs in recent years.

El Correo say Athletic will try to convince Herrera of a move during the winter transfer window, because Jose Mourinho hardly counts on him at Manchester United.

‘Operation Herrera’ is set to commence.

They already contacted the midfielder during the summer window and made it clear they’re ready to make a ‘great economic effort’ to get a deal done. That’s in regards to wages, and Herrera would be expected to get the highest salary at the club.

Now Athletic are ready to ‘insist’ on a deal, so turn their earlier words into action. 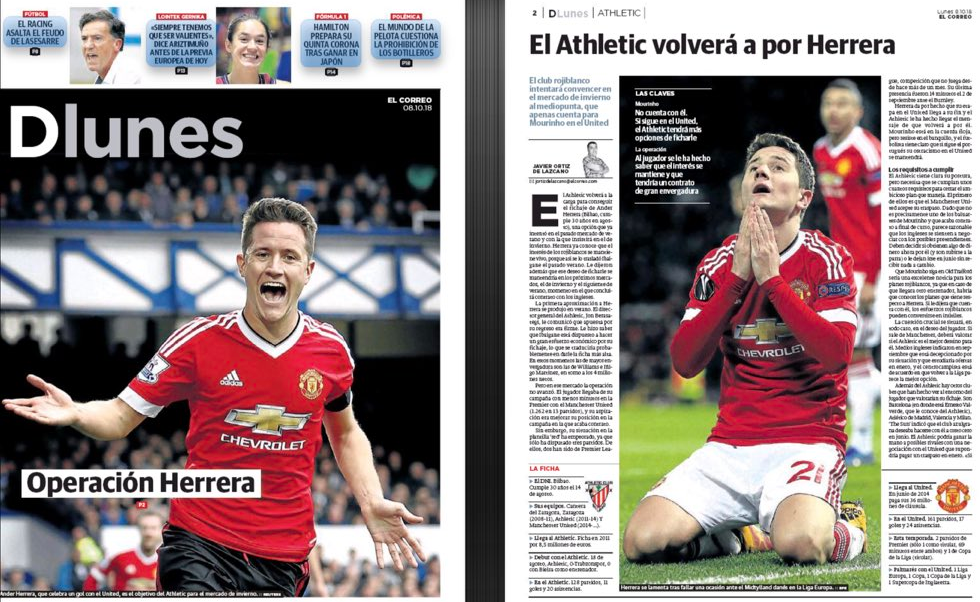 Herrera ‘assumes that his time at United comes to an end’, and Athletic have sent a message that they’re ready to make a move.

Now it depends on whether Manchester United count on the player or not. If they do then it would be expected they’d refuse a January sale and also try to get a renewal, and if not then they’d be given the opportunity to get a fee in January rather than seeHerrera leave for free next summer.

If that piece falls into place, it’s then up to the player.