It’s claimed that although he’s looking to be 100% fit and get available for Ole Gunnar Solskjaer, he’s also open to a move in case a good offer arrives before the end of the transfer window.

A source close to the player is quoted as: “There are many lies circling. But for Alexis, now, if a good club appears and a manager asks for him, fine. And if not, he will stay at United. He has no problems with that”.

One of the reasons why Sanchez is open to a move is because Solskjaer has decided to bet on more youngsters this season. 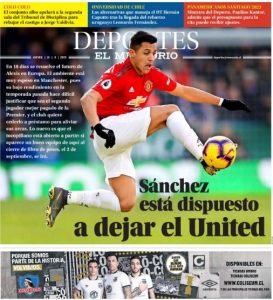 Despite speaking to people who know about the situation, El Mercurio doesn’t seem to know anything about potential destinations for the Chilean star. The newspaper only takes claims from the English media to say that the likes of Juventus, Milan and Napoli would be interested in him.

Following claims from yesterday, El Mercurio also says that Sanchez may miss the next games for the national team, as he should be focused on convincing Solskjaer he deserves a place at Manchester United first.