Manchester United worries continued during the international break after Paul Pogba picked up an injury while training with France on Monday. He will be sidelined for eight to 10 weeks.

Having starred in the initial fixtures of this season, the 28-year-old’s form dipped, which also saw him pick up a red card in the Red Devils’ 5-0 defeat to Liverpool in October.

He has been subject to heavy criticism from a section of Manchester United fans, media and pundits. A source close to the player told L’Equipe the midfielder, who ‘lives in his bubble’, ‘doesn’t pay attention to these criticisms’.

The ex-Juventus man’s contract expires in 2022. When questioned in private, the report states the World Cup winner ‘makes no secret’ of his ‘tendency’ to sign an extension at Old Trafford.

Pogba has a clear goal to renew, but needs a pay rise. L’Equipe say he wants to ‘break all salary records in the history of the Premier League’. However, the latest injury setback is not going to help his camp in negotiations, either with Manchester United or other clubs. 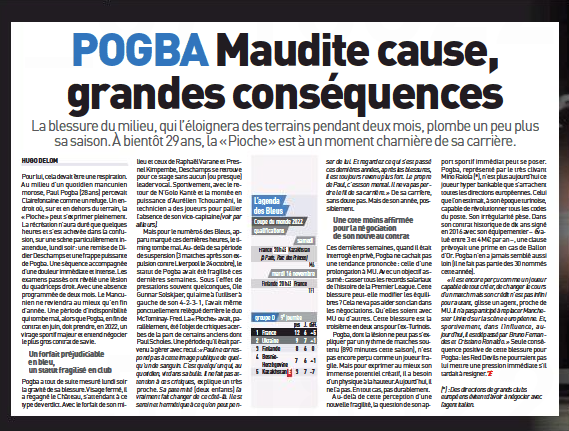 Apart from the Frenchman’s injury record over the past few years, L’Equipe explain his varying performances also ‘weigh heavily’. They say he is ‘no longer the hyper bankable player that all European leagues are fighting for’.

An unnamed agent close to the Premier League side insists Pogba is no longer the big star at Manchester United.

“He is still perceived as a player able to create everything, to change the course of a match but his credit is not infinite. He was not involved in putting Manchester United back on the European stage. And, sportingly, in influence, today he is overtaken by Bruno Fernandes and Cristiano Ronaldo,” the unnamed agent said.

Indeed, Pogba is ‘clear’ he wants to be the highest paid player in the Premier League, but his varying performances and injury record over the years will not help him or his camp when negotiating with Manchester United.