When the Copa America started, it really seemed like a new Alexis Sanchez was on the pitch for Chile. With two goals and one assist in the first two games, the 30-year-old looked fresh after a tough season with Manchester United.

But little by little, things got worse. Chile lost to Uruguay, then could only beat Colombia in the quarter-finals after a penalty shootout. They later lost the semifinal to Peru, and in the match for third place against Argentina, Sanchez played for 15 minutes in their 2-1 defeat.

Today, Manchester United manager Ole Gunnar Solskjaer claimed that the injury isn’t serious, and Sanchez should be fit to be part of the squad’s preseason campaign.

But it turns out that there’s some controversy in Chile, where newspaper La Tercera says Sanchez has been hiding details about the injury. 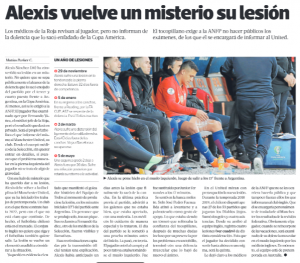 They say Sanchez has made his injury ‘a mystery’, since he’s told the Chilean national team not to make the details public. All that La Tercera could hear is that the problem is not serious.

The newspaper doesn’t seem to find a big reason for that, and says that it will be Sanchez himself who will tell Manchester United about his problem, not the ANFP.

They write that the Premier League club want to sell Sanchez, and he wants to leave as well, so the injury could affect a transfer. But it feels like they’re just analysing the situation, as there’s no new claims here.

It’s also suggested that Sanchez wasn’t fit to play against Argentina. A part of La Tercera’s story, which we translate below, says he had been complaining about his left leg before the game.

‘A mishap that happened alone, only after a sprint. His complaints to Fernando Radice, another of the doctors of the national team, were visible and striking.

‘Those recriminations captured by the official broadcast had an explanation. Alexis had anticipated a few days before the injury that finally took him off the pitch. In the last practice before the match, he warned the doctors that he was not well, that he was tight, with a discomfort. The doctors took special care of him and treated him. On the day of the match he was tested a few minutes before the start. He passed, in theory. The player entered the pitch and after a while he was already touching his left thigh. He was replaced by Junior Fernandes at 17 minutes.

‘He sat on the bench annoyed. Only José Pedro Fuenzalida managed to get up and clap his hands as a gesture of support. What was being a tournament that reinforced the trust of the tocopillano, after many doubts even by his presence for the problems in an ankle, ended with a muscular ailment that brought his mood down again.’