The Spanish media haven’t really bought into the Paul Pogba transfer as much as they have some other big potential deals in the past.

Whilst he’s reported on repeatedly, and it’s made clear Zinedine Zidane very much wants him at Real Madrid, there’s not a great excitement or desperation over convincing Manchester United.

Despite a suggestion from France that an initial Madrid offer may be around €80m, the media closest to the Spanish club make it clear that such a stance is nonsense.

Marca once again say today that it’s thought Pogba would cost around €170m, and when Mino Raiola’s commission is added, along with the midfielder’s high wages, it’s a very costly operation.

The Spanish newspaper’s Amalio Moratalla has a column on Friday looking at the situation, and makes it clear he doesn’t feel Pogba is worth the money.

The Frenchman ‘doesn’t justify’ his price-tag, and the figures involved are ‘dizzying’. He 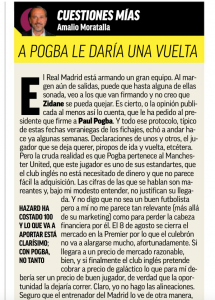 goes on to say: ‘And I’m not saying he’s not a good footballer but I don’t think he’s so relevant (beyond his marketing) as to lose your head financially.’

Moratella feels Pogba is a ‘very good player’ who would be sold for a ‘galactico’ price.

He points out that ‘mega-star’ Eden Hazard cost €100m, which should set the scale, however, he doesn’t make it clear the Belgian only had a year of contract left at Chelsea.

On top of all of that, it’s ‘not so clear’ what the Manchester United player would actually offer.

There’s certainly split opinion on this one in Madrid.