The Joao Cancelo to Manchester City story has dragged out for so long, it’s now starting to affect Manchester United players.

Since before the transfer window even opened, the Premier League champions have been haggling with Juventus about the Portuguese right-back, but to no avail.

In the meantime, the Serie A side, preparing for the exit (when a new club is found for Danilo), have been looking around Europe for a replacement, and they’ve found one: Matteo Darmian.

The Italian right-back has had his suitcases packed for about two years now, but every transfer window has been the same so far, with the 29-year-old having to put all his clothes back in his wardrobe and drawers for another season at Old Trafford once deadline day has passed. 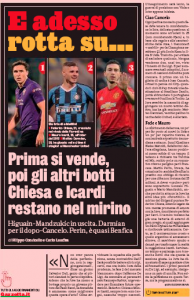 However, with this being the last chance to make money off the defender for Manchester United, there’s a feeling this could be the one, and Juventus have let him know this.

According to Gazzetta dello Sport, Juventus have already ‘sown’ their seeds and Darmian ‘has been alerted’ by the Serie A champions.

So, for the Italy international to get his move, Manchester City need to find their want away right-back a club and then spend €60m on Cancelo.

This feels like one that could happen in that period between the Premier League transfer window closing on August 8th and the Italian one doing so on August 23rd.