It’s not the most glamorous of European ties for the Premier League side, but the competition often provides a chance to visit new clubs and find grounds with great atmosphere.

That may not be the case this week.

Monday’s edition of De Telegraaf explains AZ have only sold 11,000 tickets so far for the match, and it’s not expected they’ll sell many more.

This isn’t because Manchester United is no longer the big attraction the club once was, but rather due to UEFA rules on selling tickets.

An AZ spokesperson told the Dutch newspaper: “The problem is that we can only sell tickets to season ticket holders and club card holders. And they must have purchased 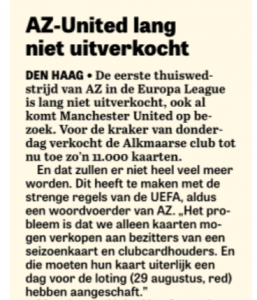 their card no later than one day before the draw.”

That was August 29th, so there’s no way around the situation now. There are likely yo be AZ fans who didn’t bother getting a fan card, and have been kicking themselves since United were drawn out as opponents.

The UEFA rule is largely to stop travelling supporters, in this case from Manchester United, being able to buy unsold tickets in the home sections.