Manchester United and Sporting have planned a new round of transfer talks in the coming days, reports Sunday’s edition of A Bola.

Jose Mourinho has made it clear that whilst he feels the young goalkeeper has a future at Old Trafford, he needs to go elsewhere for the coming season with the hope of getting game time.

A problem in talks had been that Sporting prefer a buying option over the player, and the Premier League club don’t want to risk the chance of losing the goalkeeper. 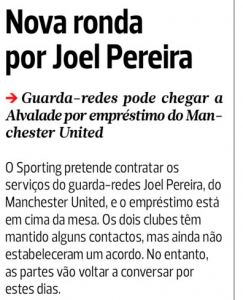 That’s why no agreement has yet been reached and whilst there’s a loan deal on the table, reports A Bola, the details and completion of a transfer will depend on what happens in the coming negotiations.

Pereira joined Manchester United’s youth system in 2012 and the 22 year old has since been on loans to Rochdale and Belenenses.

Liverpool and Tottenham both said to have ‘offered €70m’ for same...