Erling Braut Haaland has been a sensation at Borussia Dortmund and the 19-year-old has already scored 12 goals since moving to Germany from Red Bull Salzburg.

Prior to joining the Bundesliga side, Manchester United were also keen on signing the striker in January.

SportBild now state that Red Bull Salzburg received a ‘mega-offer’ from the Red Devils as it’s claimed Ole Gunnar Solskjaer’s side put forward ‘a package around €60m’ to lure the player to Old Trafford.

Part of United’s €60 offer was to trigger the player’s €20m release clause and the remaining amount was to convince Salzburg and Haaland to accept the English club’s proposal. The report adds the frontman’s salary wasn’t included in this.

Salzburg sporting director Christoph Freund is quoted as saying United were “very interested”, but didn’t reveal details of the offer.

According to the report, Haaland wouldn’t have been at Dortmund if he had ‘made a financial decision’. In addition to this, it’s also stated no other club could beat Lucien Favre’s side when it came to offering the best sporting project to the Norwegian.

Regarding Dortmund, Freund said: “From Dortmund, Michael Zorc was the first to contact us. However, there had already been discussions between BVB and Erling’s consultants.”

“Many clubs were interested, but Dortmund probably had the best arguments. BVB was looking for exactly this type of player for this position. And as you can see, it was a good decision.” 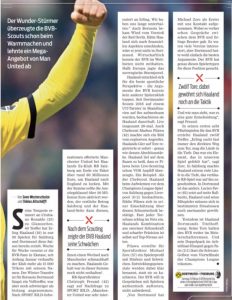 Though SportBild are stating United were ready to offer three times the release clause, it makes no sense why they wold pay more, especially when Haaland had a buyout clause at Salzburg.

It’s claimed the €40m extra would be to convince Salzburg and Haaland, but it’s not explained why United would have needed to convince the Austrian club anyway, given the clause was in place.